As we travelled from Nuwara Eliya to Ella I really didn’t know what to expect at all. I’d heard from a few other backpackers it was a bit more upbeat and more popular with tourists than the smaller towns we’ve been to but aside from that I had no idea what it was even going to look like. En route to the hotel, we drove through the Main Street lined with crowded restaurants and bars, with tourists ambling across the road engaging with the locals and the many stray dogs wandering around. I instantly got the feeling that this place was something special.

For a start, our hotel was AMAZING. With massive rooms, walk in showers and perched on the edge of a cliff side – the views from the bedroom balcony were enough to make you question whether it was all real, or if someone had projected a backdrop from a movie scene onto a screen in front of you, absolutely mad. We chilled around the hotel for a while before deciding to make our way into town to try the delicacy Ella was seemingly famous for. Rotti; and Indian dish made from chopped vegetables and potatoes wrapped in a type of pitta bread and put on a hot plate to cook. I decided to play it safe the first night (there’s a surprise…) and opted for a chicken wrap but on the second night I bit the bullet and omgod it was brilliant, it definitely lived up to the hype and it didn’t send me into anaphylactic shock, win win eh? A few of us had some beers but it wasn’t to be a wild one, we had BIG plans for the next morning and we were going to need our rest… 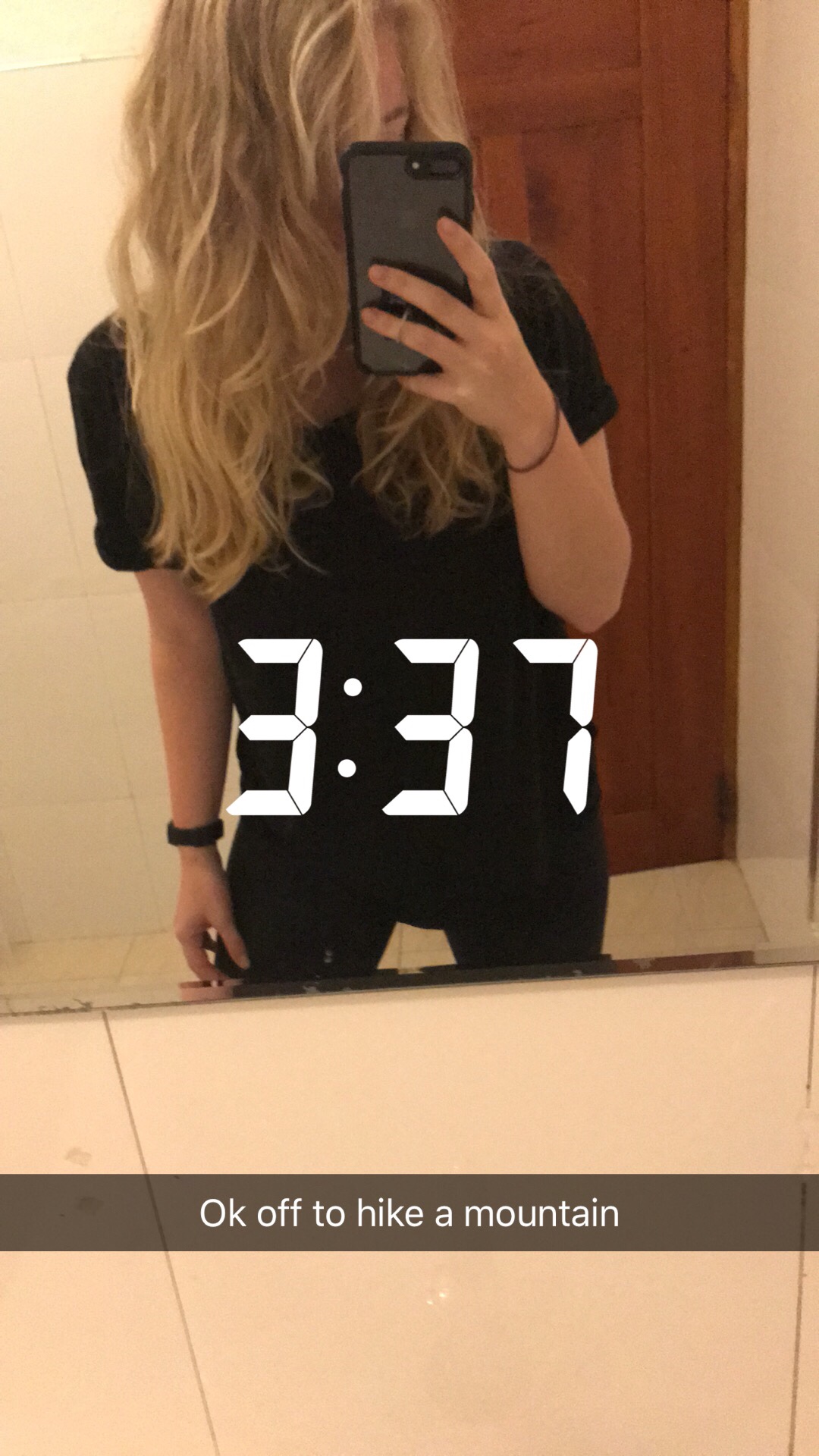 At 3:30am that night my pre-set alarm went off & I jumped out of bed, rounding up my pals crazy enough to also be in on the plan, and even managing to convince my half-asleep room mate to join us, after all when were we gonna be able to do this again, really? We lathered ourselves in bug spray, filled our day packs with the essentials and the tallest of the group secured his head torch as we set out into the silent darkness.

Another thing Ella is famous for is Little Adams Peak, a viewpoint in the mountains 1100 metres above sea level with views as far as you can see, and our mission was to get there in time to see the sunrise over the mountains. Our route to the top wasn’t going to be easy. The rest of the group had plans to climb the mountain at 8am when it was already light outside. They also had the luxury of getting a bus from the hotel to the starting line, bypassing the winding road carved into the mountain side with sheer drops the entire way. It essentially chopped 4km off their hike, but as we wanted to do it alone we were gonna have to walk it all! Oh dear god…

The adventure began with a quick check at the makeshift map we’d drawn at dinner the night before and we proceeded to walk single file round the mountains, standing aside when lorries, tuk-tuks and the odd motorbike would occasionally pass. In hindsight this part of the journey was by far the hardest. Only when we reached the top and could see the road below, did we realise how FAR we’d really walked in the pitch black and how steep the hills were that we were hurriedly weaving around. It genuinely was tempting to pack it in and head back a couple of times but we persevered and eventually made it to Ella Town, where we found the entrance to the trail and where our hike would really begin.

Along the way we’d also managed to recruit a few new members to the pack, who came in quite handy in a myriad ways – particularly when keeping an eye on the trail head. If they could make it then so could we.

It was all going fairly smoothly until our makeshift map began to let us down. WAYYY down. We were stood at a fork in the road with two options and surprise surprise, we picked the wrong one. Instead of finding the steps to the top, we found ourselves in the middle of a tea field, stumbling over rocks and climbing up the hillside on our hands and knees hoping for a path to emerge that would get us back on track. Well someone must have been looking out for us as after dragging myself out of what seemed like the 128923th tree I felt gravel underneath my feet and let out a sigh of relief, we were back on track. Taking into consideration the detour that had just happened, we knew we were soon going to run out of time before daylight and we still weren’t at the top yet. RUN. We clambered up the high steps and at last, they stopped. We had no idea where the sun would start to emerge as aside from the stars lighting the sky, we were standing in total darkness, beginning to wonder how we were going to react when the sun eventually would rise and show us how high up we really were.

We found a rock and sat down as we watched the sky behind the mountains change from black, to orange, to pink and eventually blue as the rest of Sri Lanka below us began to rise with the sound of temple playing their morning chants and dogs howling in the distance. To say it was spectacular would be an understatement. As the sun rose, the outlines of the mountains became more defined, the colours of the trees on the hills became greener and greener. We were silent for the most part, the only sound coming from the Temples below and the occasional shutter noise of a camera trying to capture what was infront of us. The photos really dont do it justice it was bloody amazing and something I hope I wont forget in a hurry. It solidified the trip as a whole so far, and re confirmed my reasons for doing what I’m doing. It’s moments like these that make it all make sense. 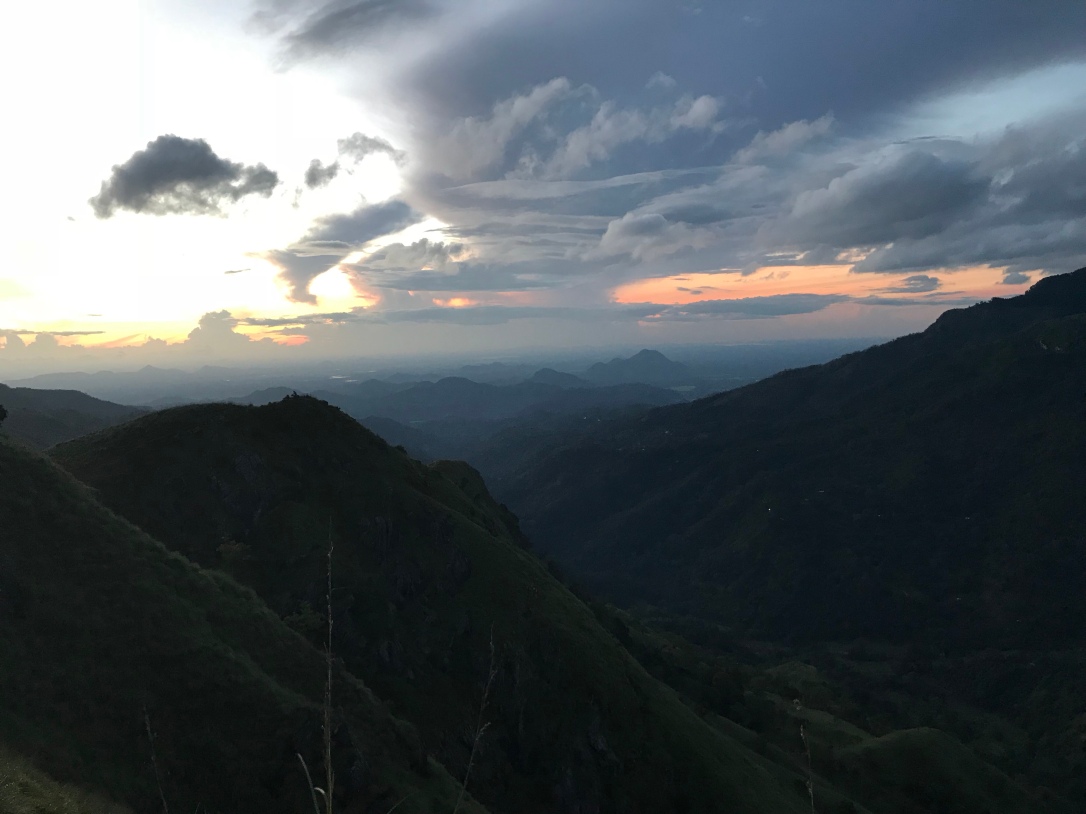 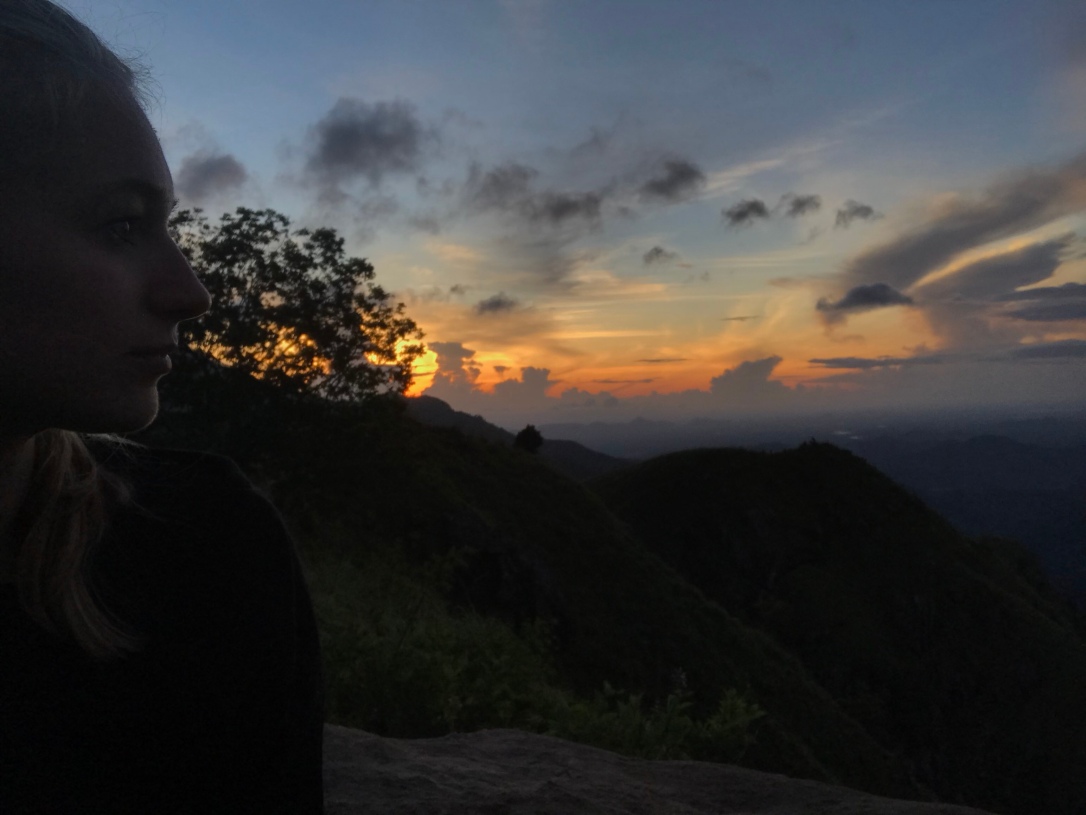 With reluctance we started to make our way back down the mountain as a couple of others who had had the same idea started to amalgamate on the top of the rock. Thankfully we didn’t have to walk all the way back to the hotel , we were picked up once we got back to the Main Street and joined the activities of the day, starting with another short hike to the 9 arch bridge. This bridge reminded me a lot of the famous Harry Potter bridge in the north of Scotland, and after a LOT of coaxing and convincing I hopped up onto the wall to get my photo taken. Pretty cool right? 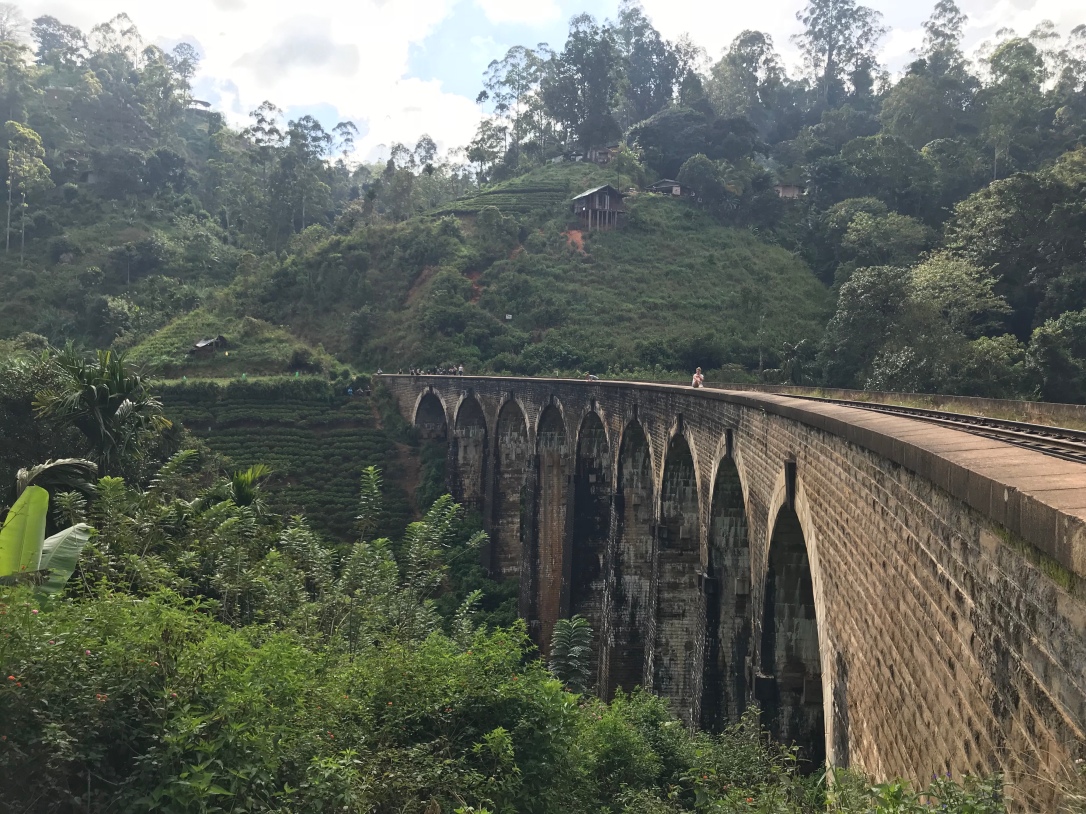 This was probably one of the best days I’ve had since arriving. Ella is one of the most idyllic little towns you will ever come across. Like usual, the locals were absolutely brilliant. They are the first to smile and wish you a good morning, even if you are covered head to toe in dirt and dust and looking like you have LITERALLY just been dragged through a bush. As much as I love a good hike and a cracking view point, this gal still seriously needs to get to the beach. Since we’ve been up the north of the island, we’re heading south to the beaches of Hikkaduwa and Galle where we’ll spend the remainder of the time in Sri Lanka. This country is SO vast and diverse, a 2 hour drive can change your surroundings from being in the depths of the jungle to standing on the beach with the sand between your toes. And that’s exactly where I need to be right now.

Let’s get to the beach! 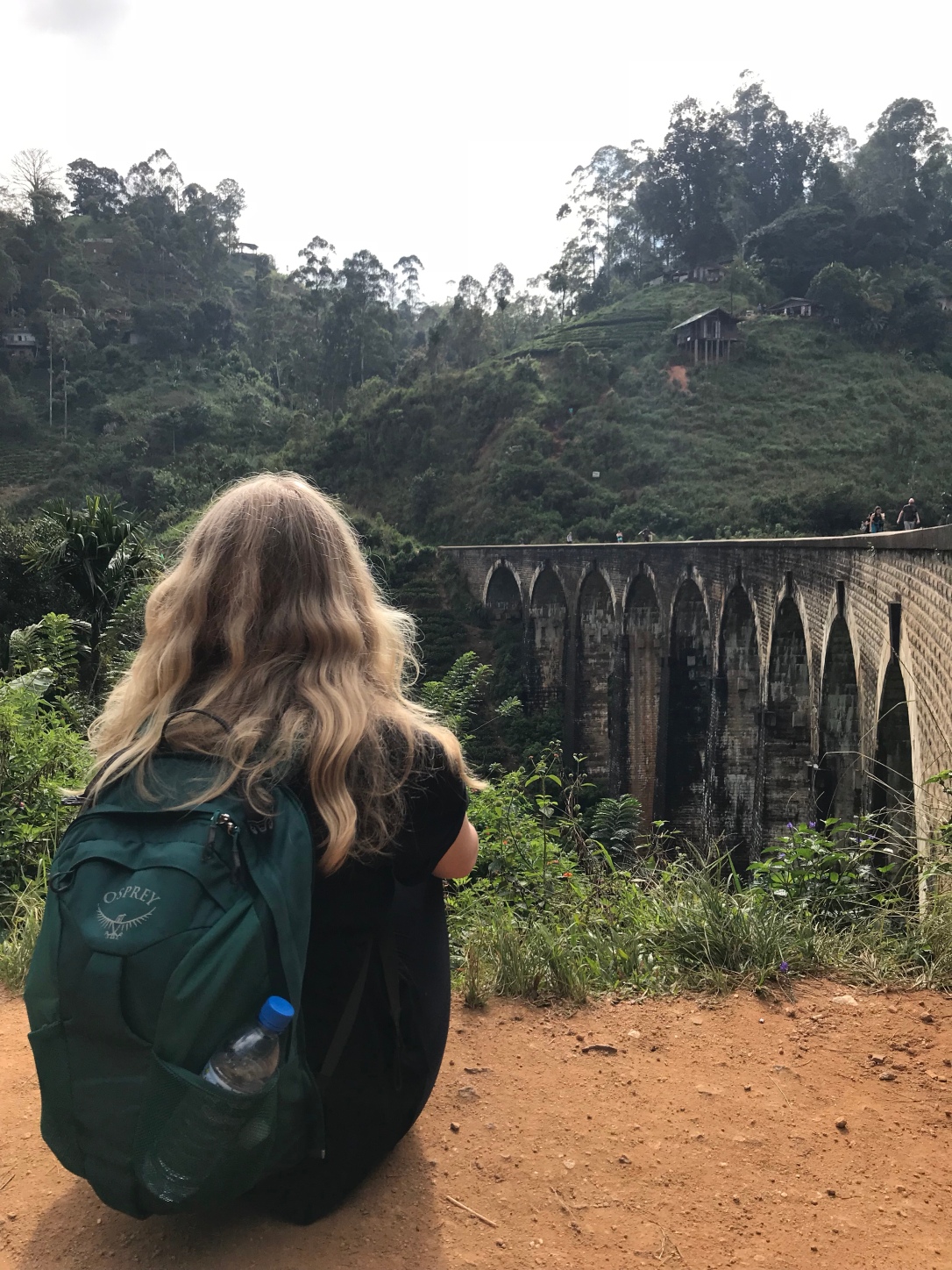