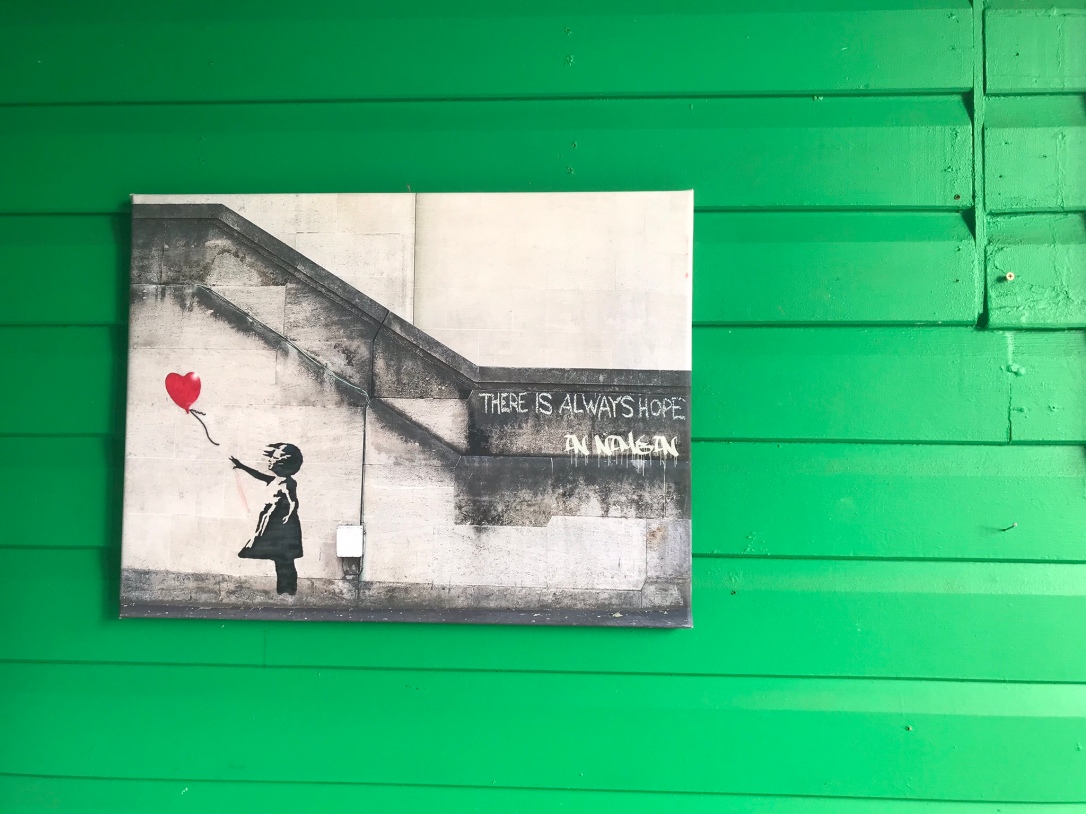 Once I’d found my check in desk for Gold Coast, everything started to feel a little bit strange. I was on my own again, wandering back into the world without my wee Ebony to guide me along. For the first time since landing in Australia I was actually by myself…for a grand total of 6 minutes until I found April and Lauren at bag drop, waiting on me getting my act together and stop crying about leaving Wollongong. Right, no time to mope around megs, get on that plane and GO!

So this was it. The ‘start’ of my east coast trip. I always had it in my head that it would ‘properly’ begin after Sydney as I’d be backpacking and hostel-hopping once again. The luxuries of Ebonys family home were now gone, and I was back to sharing a room with 8+ people, drawing straws on who was getting landed with the top bunk each night. So when I landed in Gold Coast it was actually quite a nice surprise that Aprils friend of a friend from home was there to collect us and take us to surfers paradise, throwing in a little tour of the surrounding scenery as we made our way there. First impressions on the city weren’t great to be honest. It’s a strange place, Surfers Paradise. Almost like small town meets big city, with a beach and a half a dozen strip clubs thrown into the mix. It was as if Magaluf and Blackpool had a baby and named it Surfers, although not as seedy. I think. 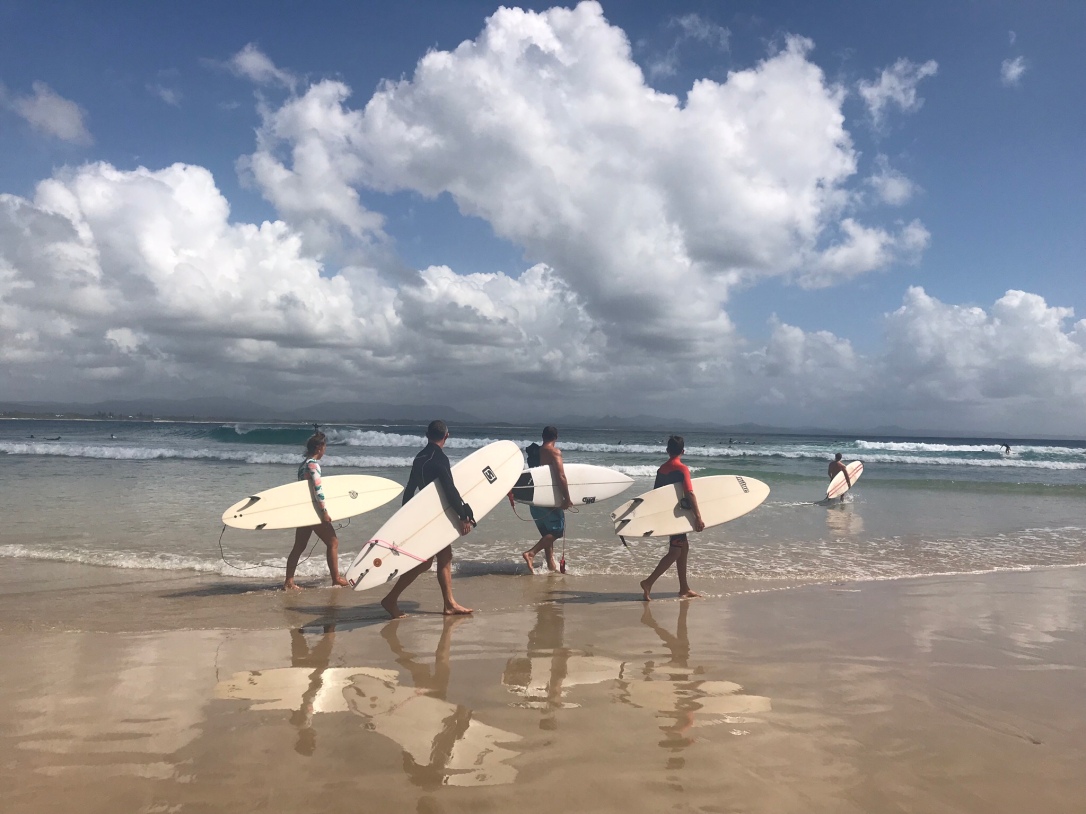 The hostel was pretty cool, we only spent one night there but you could tell that a lot of backpackers, or people on their year long working visa had landed, and subsequently got sort of stuck there. Eavesdropping on some conversations around the pool proved me right as you could tell they’d all known each other for a while. Most of them seemed to either promote for the clubs, or worked in them as bartenders (or dancers as one girl loudly attested to whilst showing off her moves for that night)…canny whack some free entertainment eh?

So it wasn’t exactly with heavy hearts that we boarded the bus to Byron Bay the next afternoon. We’d heard ALOT about this place so it kinda had a lot to live up to. And honestly, it met every expectation. April and I have similar tastes…and reactions when we come across something or somewhere we actually LIKE the look of. It’s why we got on so well (and stayed so long) in Pai, Thailand. Pai had a hazy, chilled, laidback kinda vibe that we hadn’t managed to find anywhere else, apart from right here in Byron Bay. It was quickly confirmed that we loooved this place. The only thing missing from it was the mountains, just like the only thing missing from Pai was the beach.

Byron Bay is Pai…with a beach. 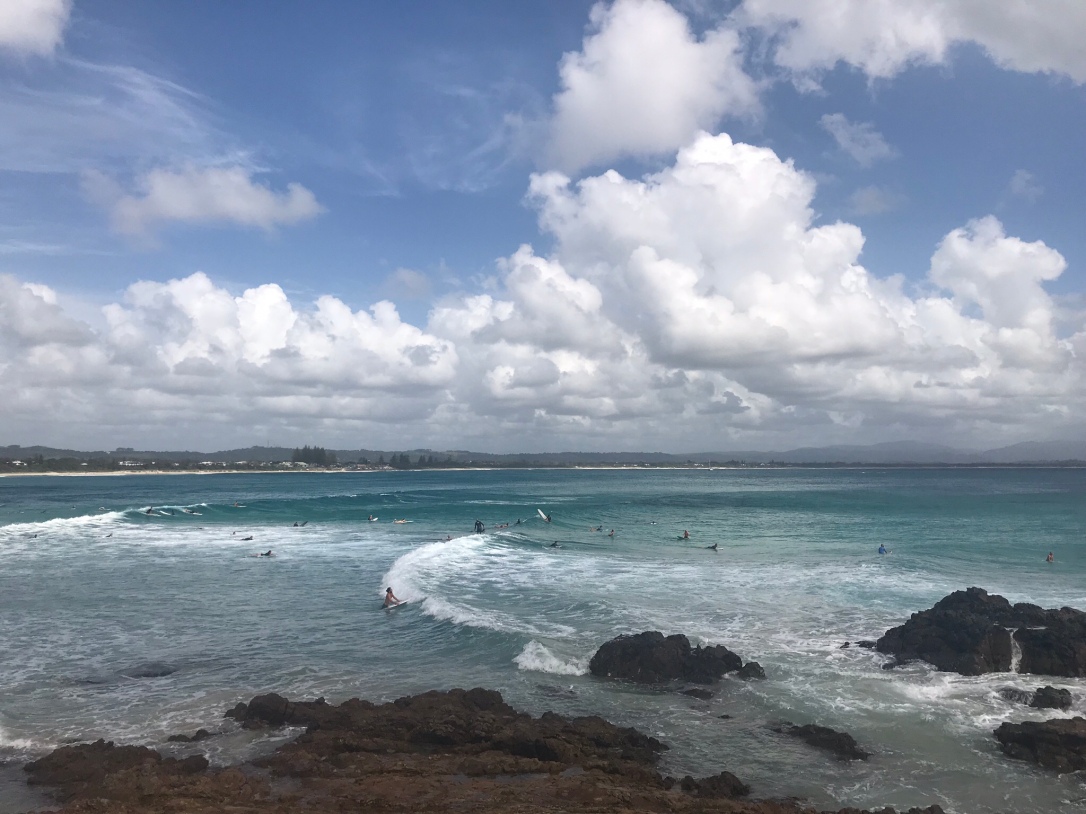 We stayed in Byron Bay for 3 nights in total.

The first night we got there it was already pretty late, but we dumped our stuff off and set out to explore anyway. We stumbled upon a fire dancing show and took a seat on the grass watching the dreadlocked nomads toss fire around, narrowly missing their beards, hair and baggy gypsy clothes with every spin. It was exhausting just watching them considering it was like 9pm and STILL 26 degrees…and then the heavens opened, put out all the fire and left us crouched under a tree with about 10 other people, soaked to the skin. In hindsight it should have told us a little about the temperamental weather in Australia but we just laughed it off and packed it in for the night. We had high hopes of going for a jog along the beach to the famous Byron bay lighthouse the next morning so we were pretty glad it gave us an excuse to cave early. 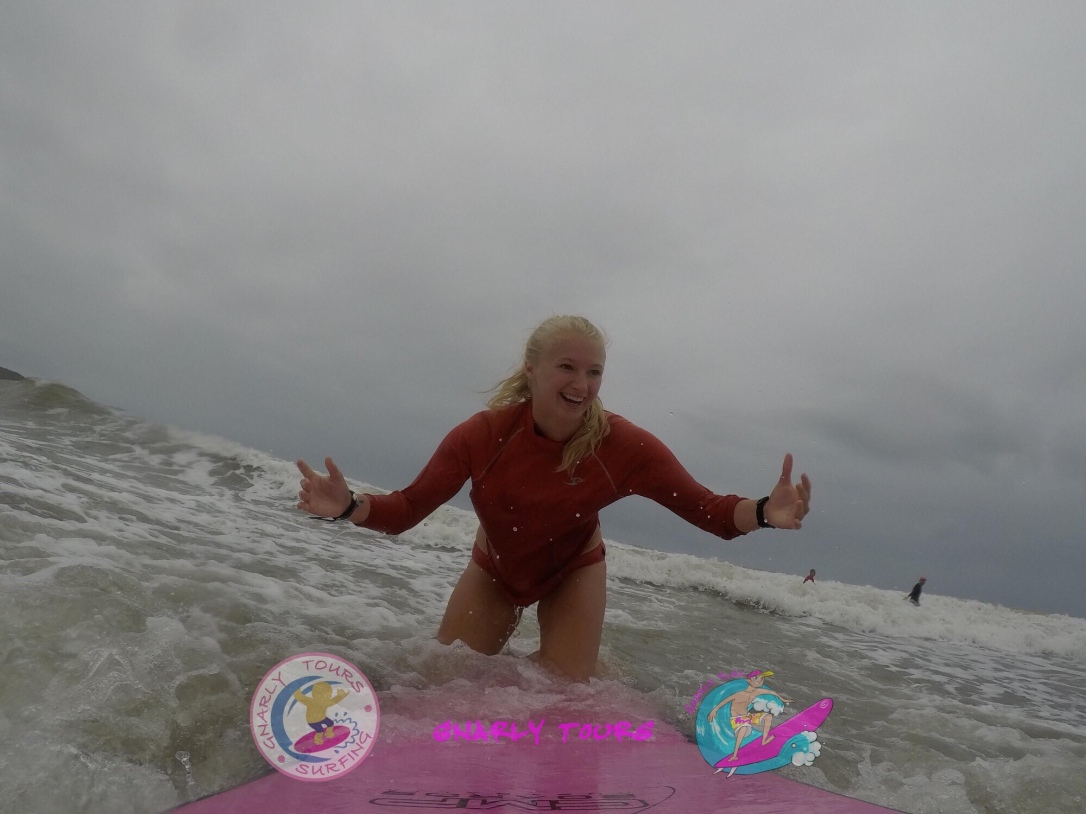 So another thing I’ve been absolutely dying to do is learn how to surf, and where better to learn than the most famous surfing spot on the entire east coast. We paid over the odds for a surf lesson in Byron Bay but it was so worth it – I stood up on my first ever wave and I’ve been hooked ever since! It’s an exhausting sport though, and it’s also no secret that dragging your board through the waves is the hardest part. So much so that after catching your first couple of waves, by the time you get out into the swell again and spot your next one you’re too bloody tired to stand up. But it’s SO much fun, I’ve never been big into skateboarding or anything that requires that much balance so it was tricky to get my head around to begin with.

It’s also a lot to remember; paddle, push your shoulders up, don’t go too far forward or you’ll go over the front, too far back you’ll roll off the end. I’m surprised I remembered any of the instructions, I tuned out after hearing the words ‘beware’ and ‘shark attacks’. But tbh its all fruitless anyway…anything you learn goes out the window when you’re being pushed into the path of an oncoming wave with your instructor shouting ‘PAAAAADDDLE….NOW!!! GET UP MEGAN!!!!’. And you do just about everything you can to stay on the board, out of the way of the other surfers, and most importantly stay on top of the water away from the sharks lurking about in the depths below…no fear for this gal cos I DID IT and what a feeling skidding about on top of the waves…just call me jesus. 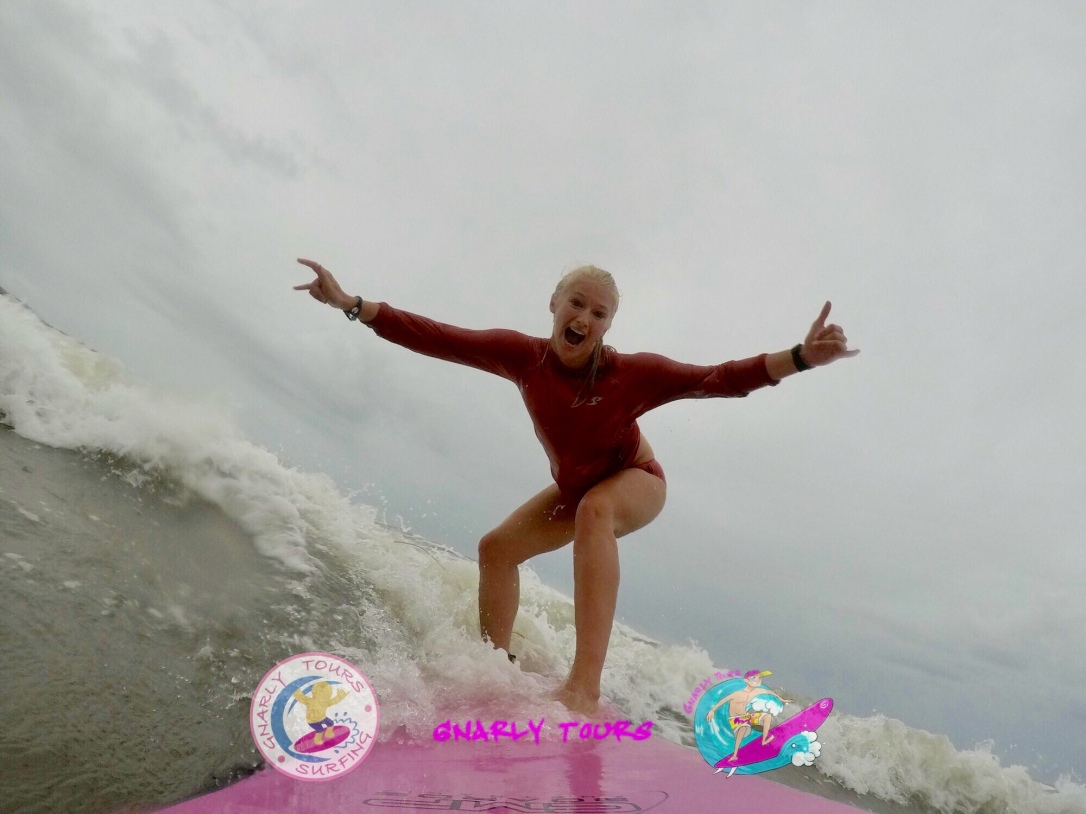 *stop reading at this bit gran*

Now for our last day in Byron we hopped aboard the big rainbow school bus to the little hippy town of Nimbin. Nimbin is a wee village in the hinterlands predominately populated by festival goers from the 60s and 70s who never managed to make it home again, instead settling here in favour of the alternative lifestyle in this cool, colourful commune. Walking down the street (singular) you pass an array of shops and cafes with one thing in common, and quite often for sale: marijuana. The town seems to be at a pace 10 times slower than the world around it as locals bumble around educating tourists on the health benefits of marijuana on the mind, body and soul. It’s something to experience, I’ll tell you that much. 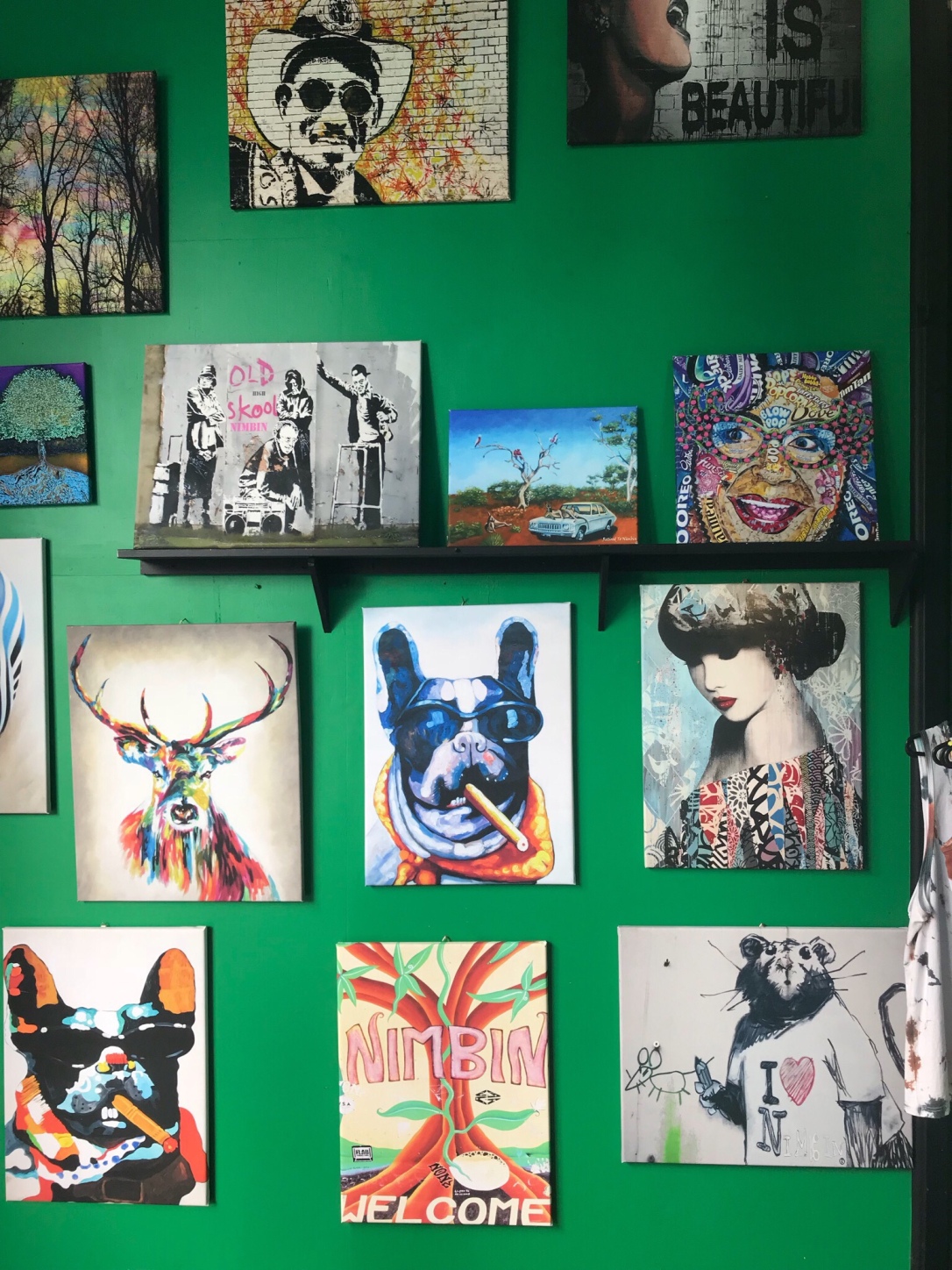 So the bus up here is run by Jim, a local from Byron Bay who seems to be packed to the brim with life experience, one liners and side splitting stories of his adventures driving backpackers to what is, quite frankly, the stoner central of Australia. We drove inland through the bendy roads through sub-tropical rainforest blasting Bob Marley, periodically stopping for munchie breaks along the way. The guy was an absolute legend – he had us all rolling about the bus listening to stories of guys in their mid twenties buying brownies, eating the whole lot and spending the rest of the drive back home trying to climb out the windows, convinced they were in the middle of an alien invasion and the rest of the bus were trying to kill them. Don’t do drugs, kids. 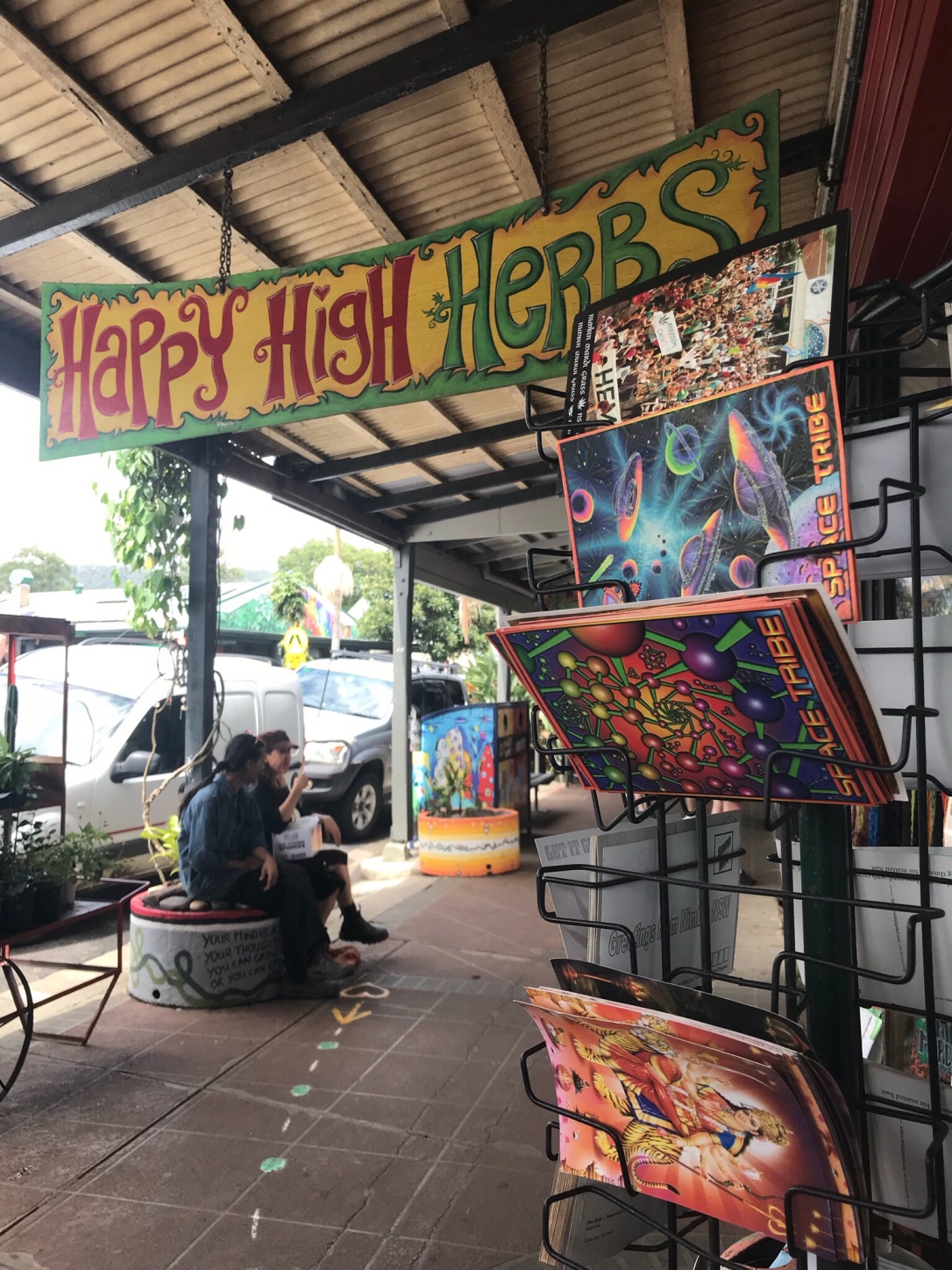 So it’s no surprise that waking up the next morning, I struggled a bit to place myself. When you’re travelling its true that you can end up a little disorientated. Like waking up in your pals house after a wild night and having no idea where you are till you clock your surroundings and breathe a sigh of relief. Except, when you’re hostel hopping, you never get that sense of familiarity. The rooms look mostly the same everywhere you go, packed with bunk beds, backpacks and their contents strewn all over the floor, and the occasional traveller holed away in a corner scribbling into a notebook that’s seen better days. But at the same time, they’re all slightly different. The layout of the beds are different, the colour of the sheets are different and your roommates are, you guessed it, never the same people as the previous day. It’s new faces with new stories to find out about, and it all changes every. single. day.

So when people ask me if I’m sick of travelling yet, how could I be? I’ve met (and forgot) more people in the last 4 months than what most people have met in a lifetime. And sure, sometimes we might only talk for a couple of minutes but what’s for certain is that you will never, ever forget each other. You’ll keep updated on each other’s lives on the various forms of social media that we all have nowadays and should you ever find yourself in their neck of the woods, rest assured they will pop up and offer you a couch to sleep on. Because we’re all in the same boat, all of us. We’re all in this together and like it or not, you’ll probably find them again someday, somehow, somewhere and you’ll feel like you’re back in Australia, rumbling through the jungle on a rainbow bus with no brakes…or brains.

This life is a crazy, hazy paradise.

We just need to learn how to ride it. 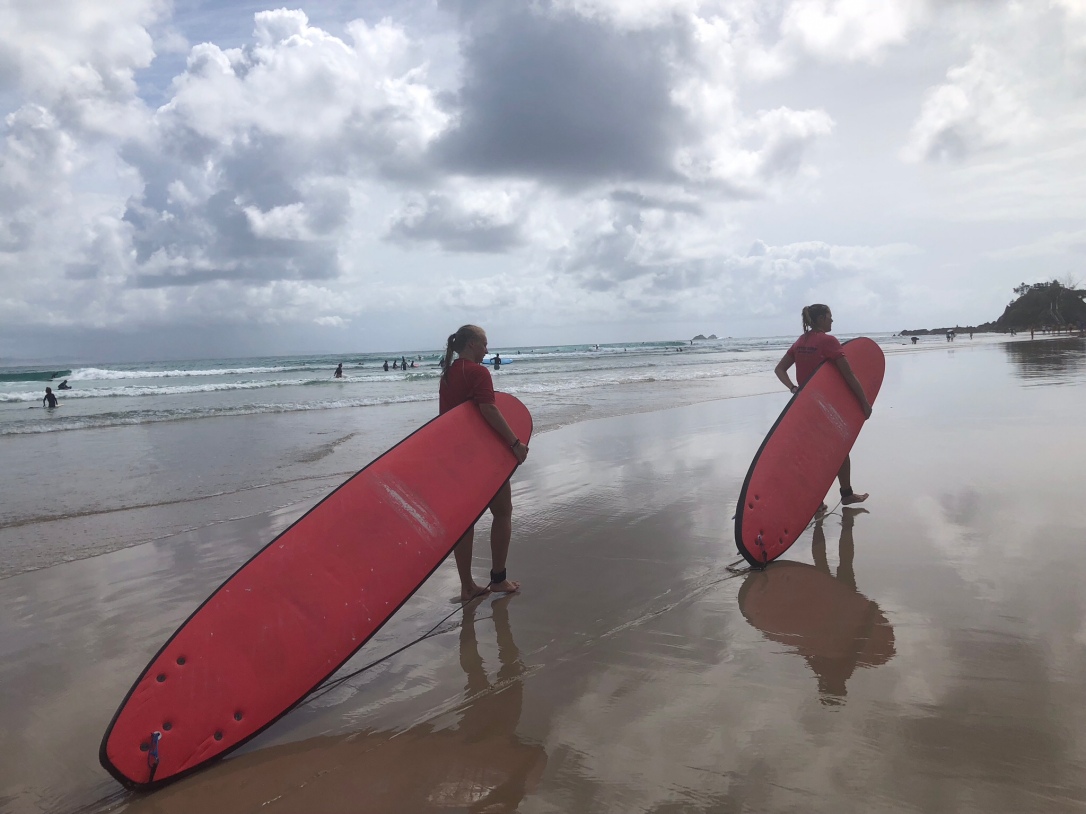