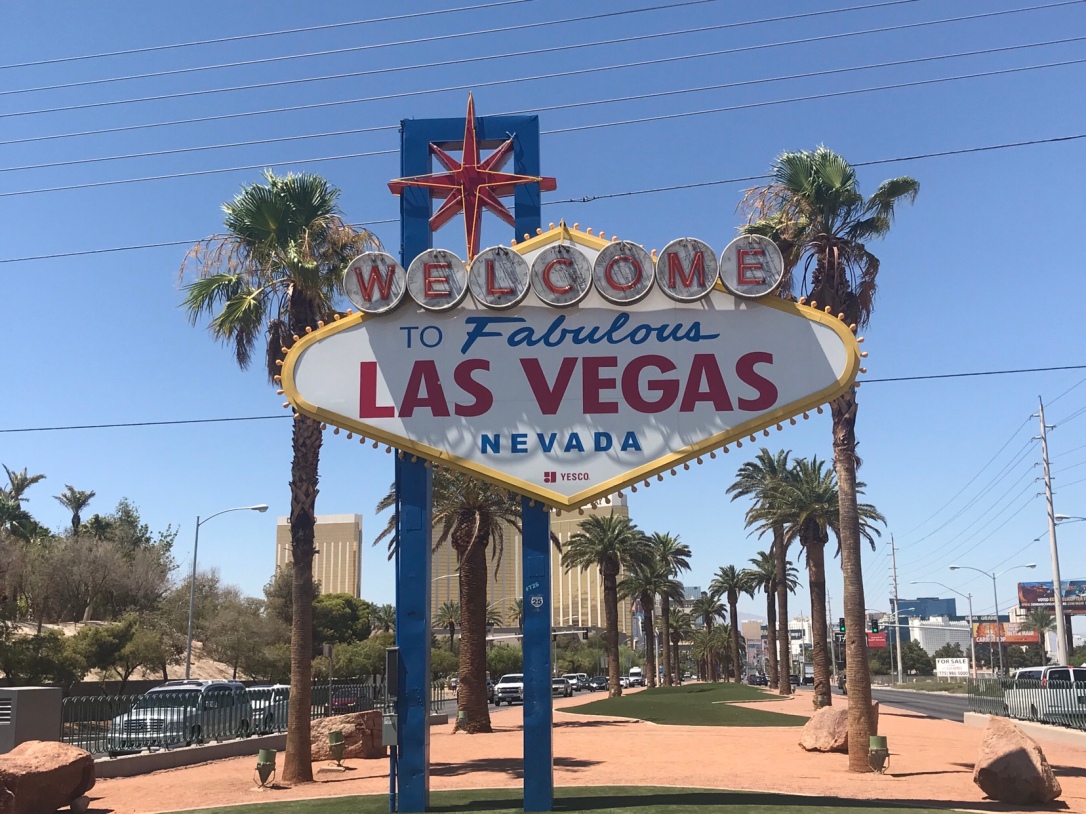 Flying over and landing in Las Vegas was one of the most bizarre things I’ve ever seen in my life. One minute you’re flying over a vast nothingness, just bare dessert, and the next you’re soaring over gigantic canyons and toothpaste-coloured salt lakes that hardly look real. And then out of nowhere, you see it.

At first you think it’s a mirage it looks so out of place. Massive sky scraper hotels with ferris wheels and replica light up Eiffel towers… an entire miniature New York resort setting complete with a life-sized version of the Statue of Liberty. Every angle you looked out the window there was something else emerging from the sky line…it felt like I was landing in an oversized theme park. Where instead of riding rollercoasters and giant swings, you trade cash for poker chips and wander around in baking hot dessert sun into hotels and resorts bigger than some small villages.

So we were staying in the Bellagio as a treat from Taylor’s mum. You see she knew fine well that we were planning on hiring (and consequently sleeping in) a car/campervan for the foreseeable future so she very kindly treated us to a night in a bed with a shower(!) and a tv to leave us rested enough (as much as we could be…) to tackle this mammoth road trip we were about to begin.

In Glasgow airport as we waited what felt like days on our delayed flight arriving, we’d found a campervan needing relocating to Calgary from Los Angeles so we went ahead and booked it – paying only a fraction of the price for a car with a roof tent compared to actually hiring it directly through the rental company. All we had to do was get ourselves to LA over the next week or so to pick up the van…easy enough right? We were gonna give it our best shot anyway. Challenge accepted.

We hired a rental car from the bellagio help desk and set out on our way into the desert in search of our first of many national parks we wanted to see. First up was Zion national park – one of the coolest places ever! We drove through gigantic crevasses craning our necks to see the tops of the curved canyons faces above us, so big that the massive rock structures failed to fit on our camera screen. It was our first national park of many and in my opinion, the perfect way to set us up for the rest of them. We’d pretty much jumped head first into the road trip with no real pre meditated plans, we were literally winging it. And it was going well so far…

As we headed out of the park it was beginning to get dark so we really needed to find somewhere to sleep. As “free camping” isn’t really a thing in America, and we didn’t really want to pay for a campsite when we’d already hired the car (we were intending to just flip the seats back for the next week) we went in search of a quiet rest stop we could pull over for the night. Eventually we found somewhere off of the main road and did our best to try and get some sleep but since we had pelted right into the middle of the desert that morning, we hadn’t managed to get any supplies to make ourselves comfortable… We had no pillows or blankets and it was too dark to start messing around with folding the back seats down to sleep in the boot – so we slept in the front seats, freezing cold (it got down to single figures outside) and proceeded to chitterthe rest of the night away. So much for so far so good eh? 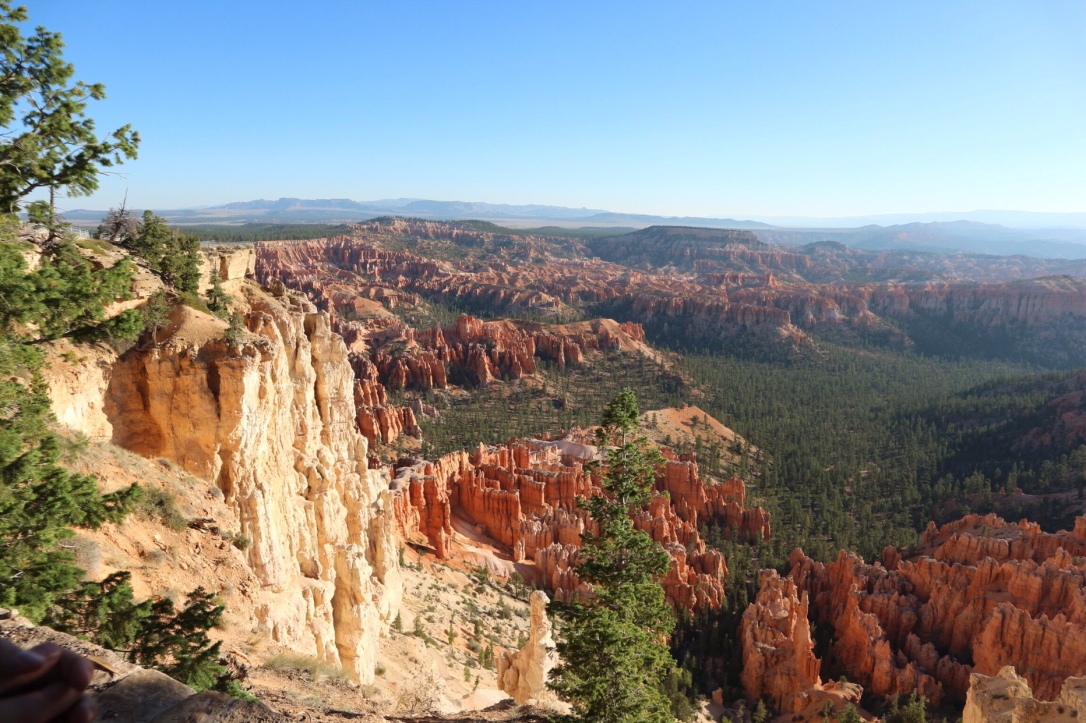 One of the only times I’ll say it but thanks to the wonderful thing that is jet lag, we woke before the sun did and decided it was best to just get a move on before the roads got busier and the parks filled up with tourists later in the day. Bryce Canyon national park wasn’t too far from Zion so we took our time and arrived just after sunrise. I had NO idea what to expect from Bryce as I’d decided not to google it. It’s probably why it sticks out in my head as one of my favourite places since I just wasn’t prepared for how COOL this place actually was.

Thousands and thousands of free standing rock pillars peppered the land infront of us as far as our eyes could see. While the sky was a bright blue with not a cloud in sight, the rocks below us were a bright orange with flashes of green where grass grew out of the side of the canyon in the distance. We had the place entirely to ourselves as well since we’d gotten there so early, so we took our time getting plenty photos and just stood staring at what was infront of us, baffled by how silent it was and just amazed at what we were so lucky to be seeing. 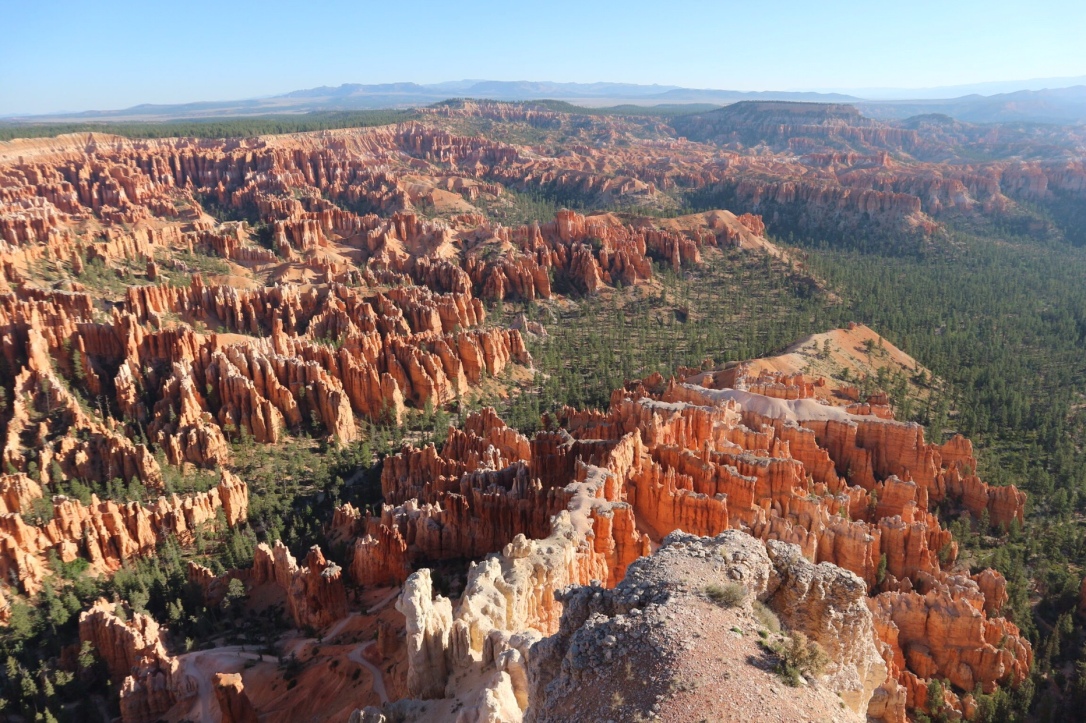 It’s weird sometimes when I’m travelling I forget that all these things are real and not just put there for tourists to visit. Places like Vegas which are entirely man made for example, it’s hard to remember when some things are just BEAUT and humans haven’t had anything to do with it. And this place was no exception. It felt like someone had painted a back drop and hung it from the sky infront of us…but it was all real. Especially after I’d come into America refreshed with a whole new perspective on my upcoming adventures I really was just so SO happy to be there. I’m so bloody lucky I swear to god.

SO we ambled around the viewing deck and along the little paths to get different views of the MASSIVE canyon before heading back to the car to explore the park a little more. There were more cars arriving by the time we were leaving so we went into the lesser known sections of the park (for example; fairyland canyon) getting some more secluded views before starting on our long longggg drive up to Utah…

We were headed for Arches National Park next. A massive area of land with hundreds of naturally formed sandstone arches and since it was a long drive (over 12 hours…) we decided to google it and check it out first to see if it was worth the trip. Collectively we decided it was so we stocked up on pillows and blankets in a little town shop somewhere in Nevada and started our long drive north.

I say *our* long drive but I really don’t mean that. I didn’t drive a single bit the entire time actually. It’s not that the option wasn’t there, I offered. And Taylor offered to let me have a go but if im being honest I didn’t trust myself to be able to drive on the other side of the road and not accidentally hit anyone. I also drive like little miss daisy so it would have taken double the amount of time to get anywhere if I was behind the wheels… Taylor insisted he was fine driving anyway and we pulled over when we needed a break and wanted to stretch our legs so it wasn’t all bad. Except when our signal would run out and we were stuck listening to the country music channel for hours on end, which also happened, a lot. 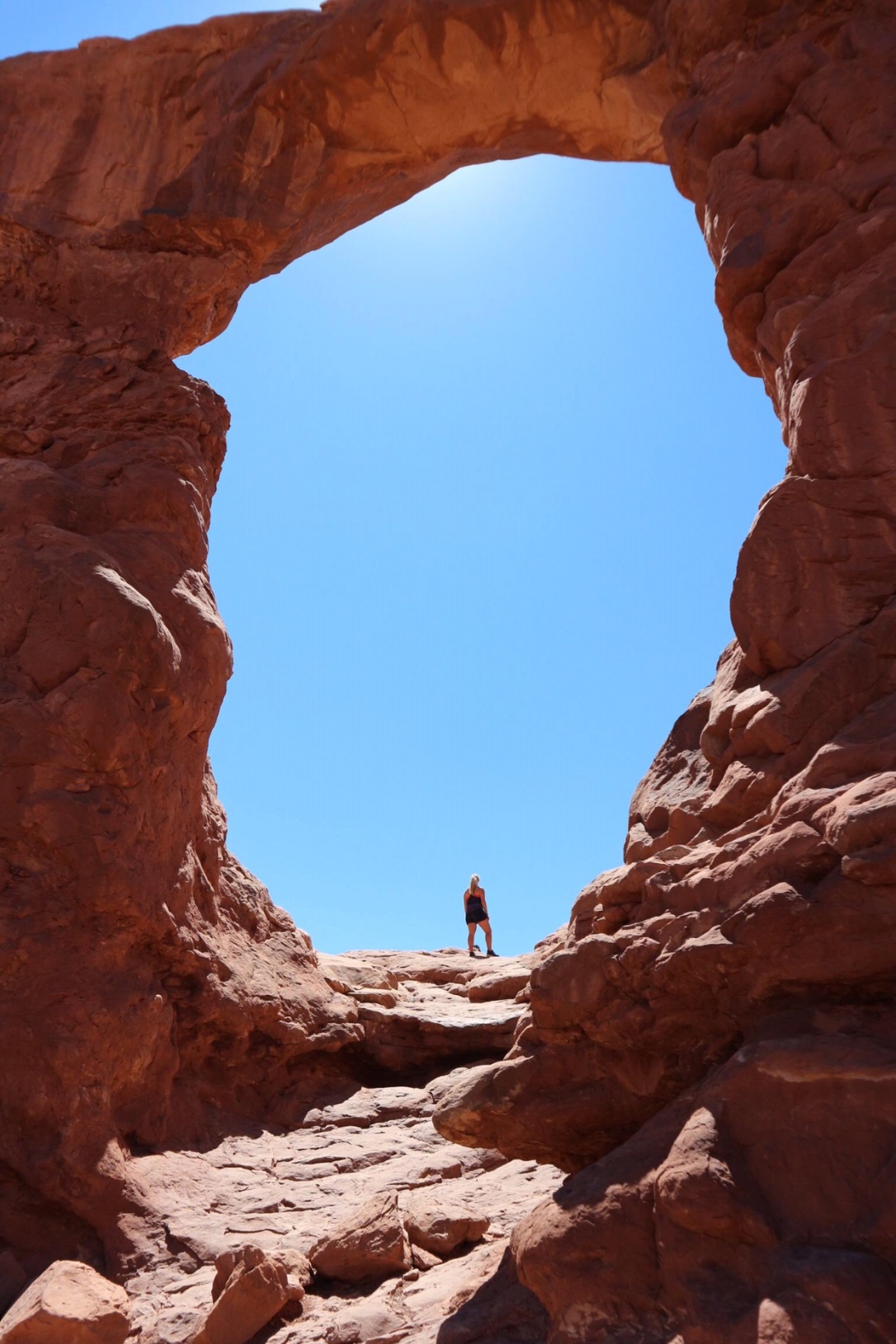 Arches national park was SPECTACULAR. I actually thought tayls was gonna pass out with the heat (it reached a toasty 119°F) and getting in and out of the car without getting burnt on the metal trimmings was becoming a real task. One I failed at MISERABLY. We hung around for a good few hours driving to the arches we wanted to see and scrambling up red rock mountains tryna get that insta pic (poor tayls. You all know he was my personal photographer – oh and he didn’t even moan once…aye right ).

Next up on our national park list was monument valley so we packed in another full day of driving through the red country before coming to stop at a small town right next to the state park. Every other park we visited was covered by the National Park pass we bought at the beginning (each park costs 35 to enter but the annual pass is only 80) and eventually it pays itself off, especially when you end up checking 10 of them off by the time your trip is over.

The best part about monument valley for me was not the actual park but the fact we were in this little town right outside it during their own 4th July celebrations. We rocked up and parked on a red sandy parking lot area (to sleep for the night) when we realised something was actually happening as more and more cars pulled into the lot. We ended up sitting watching the best firework display ever, lasting well over 25 mins before falling asleep (and being moved on…3 times that night…) under the most unreal night sky ever.

The next morning we drove over to the entrance of the park and watched the sunrise behind the rock structures. Deciding we couldn’t top the view we’d already seen from where we stood, we headed south again to get closer to the Grand Canyon, hoping to get as close as possible before it got dark, and so we could limit the amount of driving we (Taylor) had to do in the morning.

We hadn’t really hiked much so the Grand Canyon for us was the place we wanted to do a trail of some kind. After a little research we opted for the bright angel trail that goes about 1/3rd of the way into the canyon and back out again. It’s one of the only ones you can do in a day as the Canyon is so deep it’s physically impossible to get to the bottom back to the top again in 24 hours, ESPECIALLY in 39 degree heat.

The Grand Canyon was everything it’s made out to be and more. And it really is… grand. As you’re looking out onto it it’s hard to imagine it was just water that made such a massive crater in the earth…that millions of tourists from all over the world come to visit every single year. It’s not hard to believe why, when you see it in real life.

I feel like this post should end here, as we head west to LA for a drastic change of scenery and say goodbye to our trusty little car that carried us hundreds of miles on dusty red roads… 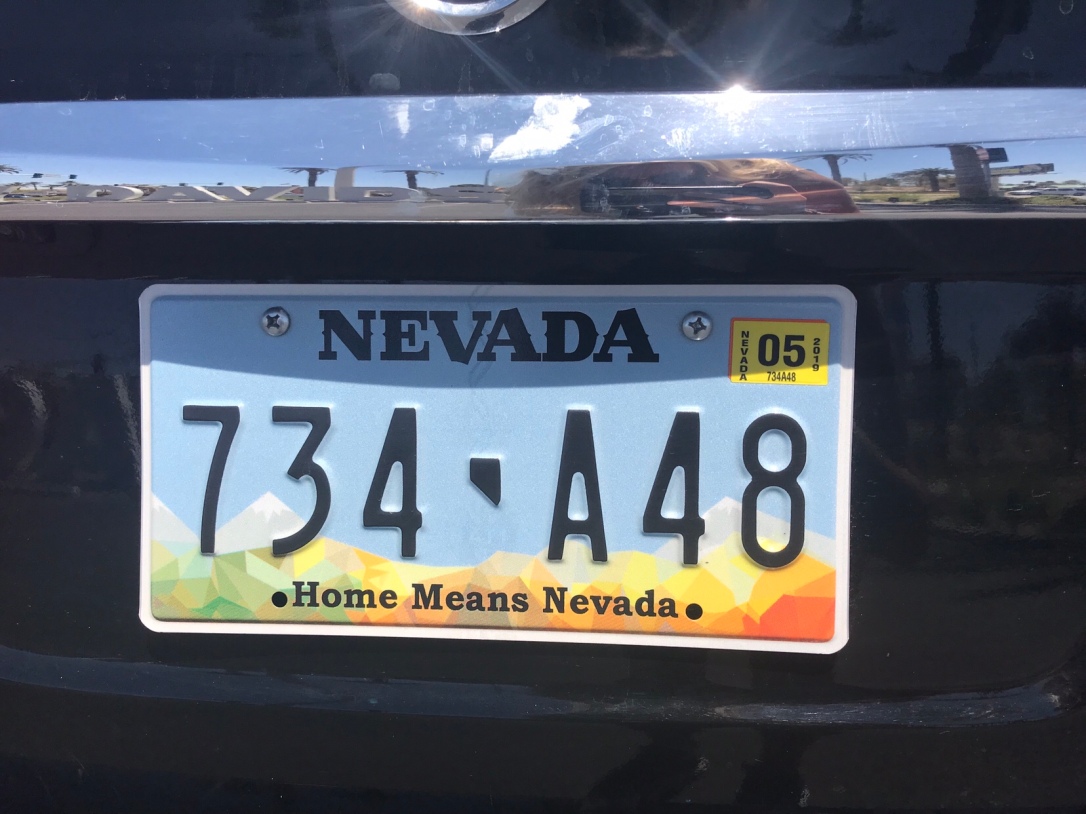 Next blog post will be city living, some more national parks (and their grizzly inhabitants!) and crossing national borders as we headed north to Canada to deliver our little zebra van to Calgary.