Picking up from where I left off last time, I did say I’d be writing an entire blog post based on my experience at the Killing fields of Choeung Ek and as a forewarning, this probably won’t be an easy read for most of you. It has actually taken quite some time to get around to writing this, as not only was it hard to witness personally but I felt like I had do some further research in order to properly tell the story and do it justice. What happened in Cambodia, to Cambodians, by Cambodians is what can only be described as horrific. The experience as a whole was harrowing. It left me speechless and unable to string a sentence together for quite a while so it was unthinkable to just tack a little paragraph about it onto the end of a lighthearted blog post somewhere down the line.

To really be able to understand the situation it’s important to go back to the beginning and get to grips with the fundaments of the political structure of Cambodia at the time – as the genocide was essentially the product of a totalitarian dictatorship of Pol Pot, an evil man looking to purge the country of class divides, corporations and anything that compromised the pure, working class ideology he believed Cambodia should aspire to follow. This post will go through a brief history first before going into my own reflections of what was honestly one of the most difficult experiences I’ve ever had to face.

One of my main reasons for going to Phnom Penh in the first place was to go and visit the genocide museums and learn about what happened in Cambodia under the rule of Pol Pot, the general secretary of the Communist Party of Kampuchea from 1963-1981. Pol Pot (born Saloth Sar) was heavily influenced by the Marxist-Leninist totalitarian ideology and believed strongly in a communist peasant farming society in order to ‘purify’ and get rid of all of the bad ‘roots’ of society. From the get-go his 4 year regime instructed people out of their homes and villages into the countryside where they’d work long, gruelling hours farming the land and surviving on very little food and water. As a result of starvation, over exertion and disease around 25% of the population (1-3 million of a total 7 million citizens) were worked to death or executed in the most brutal of ways.

Choeung Ek is only one of hundreds of killing fields dotted all over Cambodia, where people would be loaded onto trucks in the dead of night, promised that they’d be returning to their villages and be reunited with their loved ones. Instead, they would be shipped to the camps in numbers of around 60-70 per day, unloaded into wooden sheds and be lined up, watching and listening as they waited for their own executions. At the beginning, the guards at the camp executed them as soon as they arrived so there was no need for any places to ‘keep’ them until it was their turn. But at the height of the regime, guards were finding that they were unable to kill the sheer amount of people all in one day, and so they were piled on top of each other in a double insulated shed with no daylight or air vents, and where no one could hear their screams from the outside.

Once you arrive at the killing fields, there is this eery silence that permeates the entire site. You are given an audio recorder pre-loaded with 24 tracks which you can play as soon as you get to each stop. Each track either describes a location (where sheds used to stand before they were destroyed at the end of the regime), information on the mass graves, or personal recollections of people who had lost their entire families during the rule of the Khmer party. As you are walking round, you stop noticing the people around you as you listen to the sheer devastation that happened right where you are standing. There is a path made out of wood that sits about 1 metre above the ground, with bridges and walkways all around the site and over the excavated mass graves. You are still unable to walk on the soil itself as even to this day as there are still bone fragments and items of clothing coming up through the dirt – which groundskeepers find and leave them to rest in glass boxes dotted around the fields.

You are given detailed descriptions on how these people were killed. Almost always by blunt force rather than by shooting (guns were loud, expensive and the executioners had easier access to tools such as pick axes, hammers and steel mallets). The executions were usually performed at night, drowned out by loud speakers hanging from trees blaring political songs and propaganda, with bright white spotlights fuelled by the noisy diesel generators chugging away. Hands tied behind their backs, prisoners would be lined up at the edge of the mass graves where, one by one, they’d be pushed to their knees and struck over the back of the head several times in order to kill them. Sometimes they were still breathing when they were pushed into the pits so guards would set down the chemical D.D.T to both mask the smell of rotting flesh and to ‘finish the job’ should there be anyone buried alive. The pits would swell from the chemical gases, and part of the reason the graves were found shortly after the end of the Khmer Rouge was because they had swelled and split, unearthing the thousands of bodies still in the process of decaying underneath.

It was a local man returning to his village who had recognised the former Choueng Ek Chinese graveyard looked a little differently than it had before he was whisked away all those years before. In the audio recordings he described the sheds he saw full of weapons, chemicals and the office sheds built for the guards to sleep in whilst they performed the brutal executions day after day. The thing he said that has stuck with me most out of everything I saw and heard that day was the tree right next to the biggest mass grave. The tree was used to kill mothers and babies, forcing mothers to watch as guards picked the children up by their legs and swung them full force into the tree, breaking their necks and tossing them into the pile of bodies below. The mothers would then be killed and thrown in right behind their babies. The local man described the tree as ‘bright red, covered in blood, hair and brains’. He said it was obvious that babies were killed here and this was confirmed when the grave was excavated and unveiled the bodies of mothers and children who had been brutally murdered and tossed into the dirt. 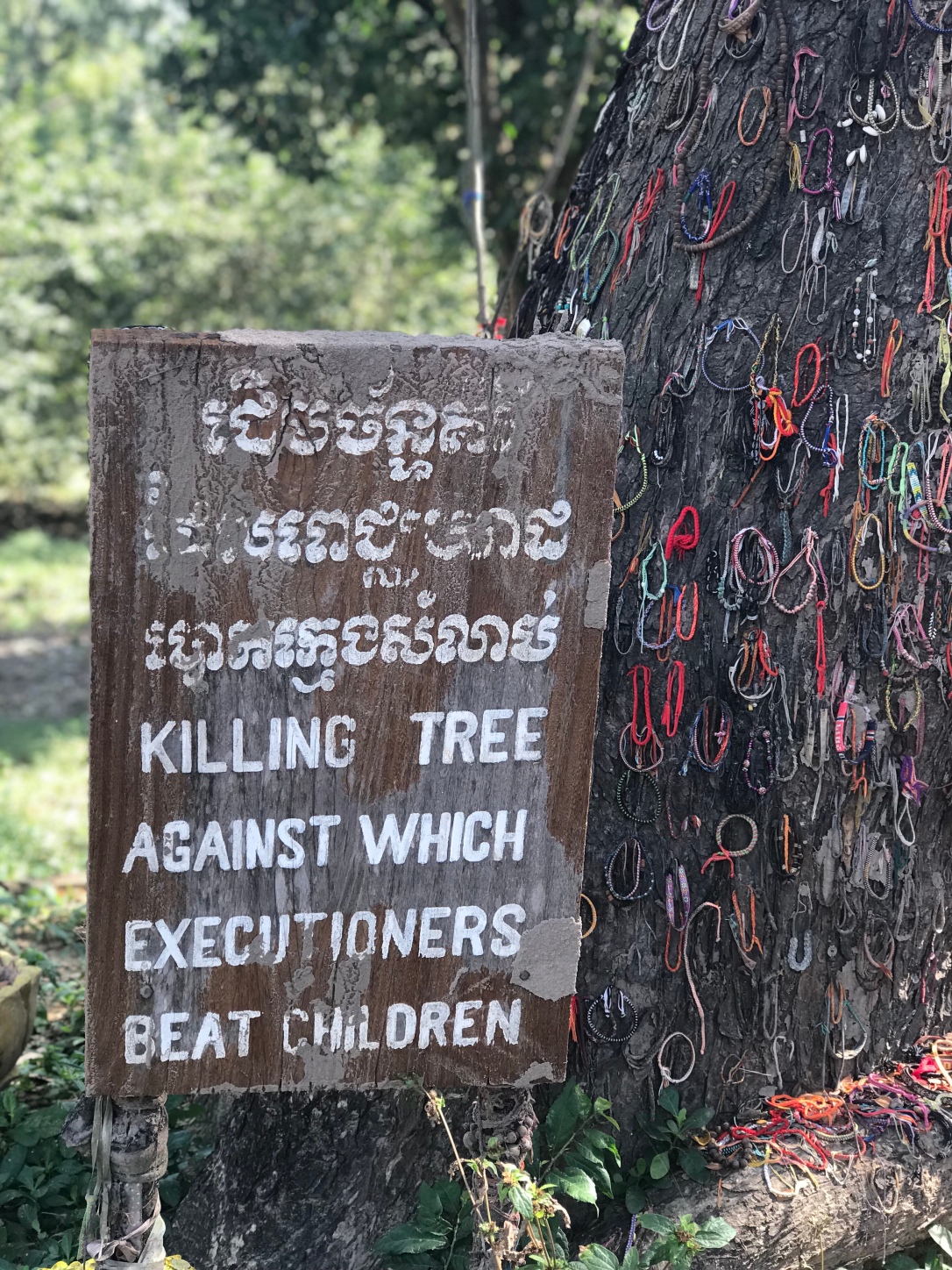 Situated right in the middle now stands a memorial tower for the victims of the Khmer Rouge. Inside, there are 18 levels where the remains are on display, ordered into categories of age, how they were killed, and separate levels for clothing, teeth, and other fragments found during the excavations. Some graves remain untouched. Some lay underneath the water that splits the fields and some were purposely left to prevent any more disruption to the bodies below. They’d been through enough as it was and scientific findings had all but proved everything that happened anyway so there was no further need for excavation. It was decided to just leave them in peace. At first I was unsure how I felt about the bones being left on display for people to stare at in glass boxes like animals in a zoo,but at the end when you have finished walking around, there is an exhibition where you are able to read more about the views of the locals and how they opted to commemorate their friends and relatives. Partly to show the world what happened here and to draw awareness but above all, to educate the world about what can happen and to help prevent it from ever happening again. 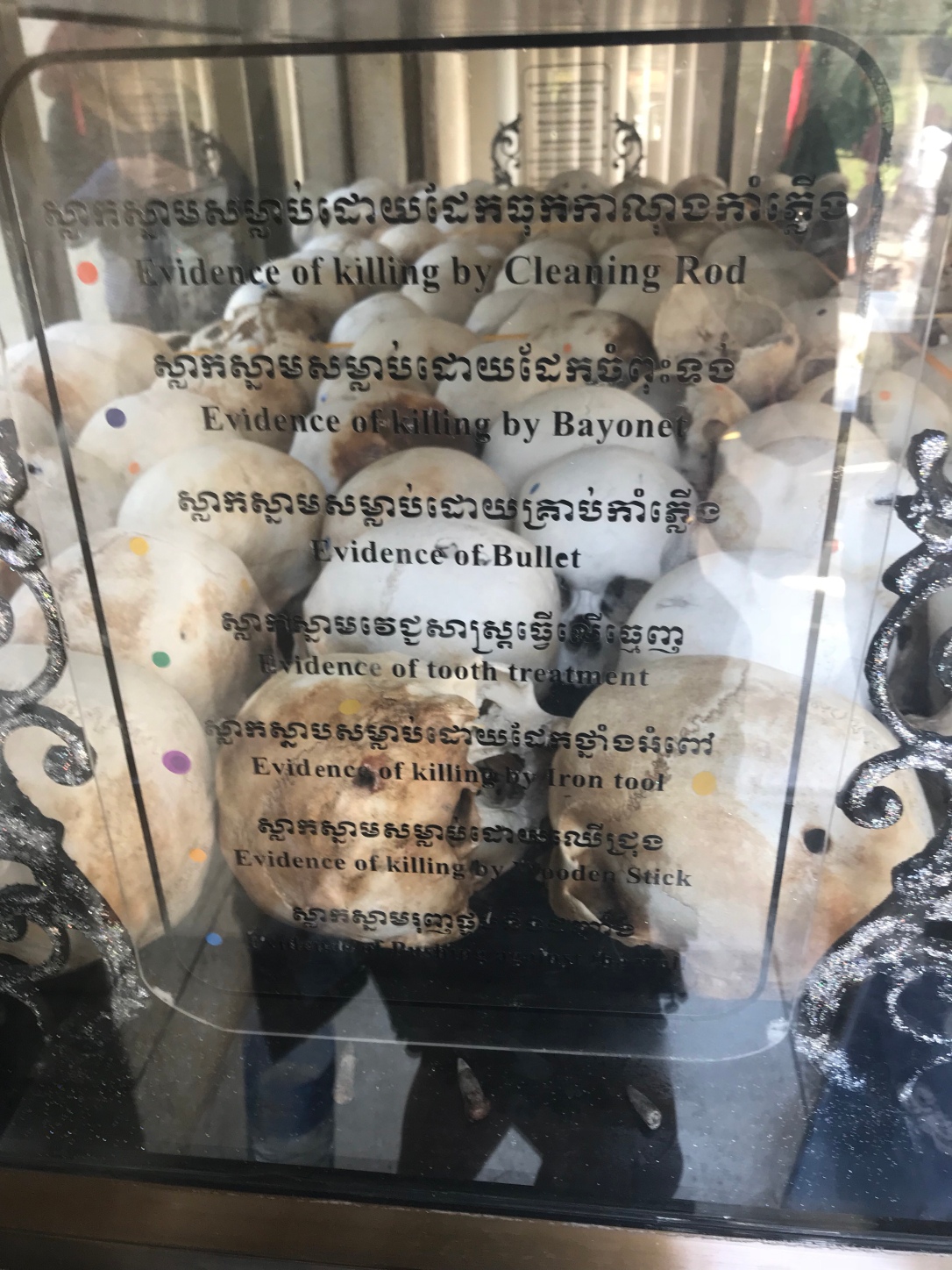 This post is nothing like I have posted before, or probably will post again. But it’s important that I don’t just post the good things as that wouldn’t be a fair representation of everything I am out here doing. Of course I am here to enjoy myself and take some time out, but learning about the history and culture of a country is just as important, if not more important than continuously posting stories about my new friends and adventures. The killing fields of Phnom Penh was by far one of the most disturbing things I’ve ever learned about and it’s disgraceful that we know so little about it considering it happened less than 50 years ago. The fact that it has taken me more than a week to be able to sit down and write about that day goes to show the effect that seeing something like that can have on you. I don’t regret going, in fact I think it helped solidify my opinion on Cambodia as a whole. It changed my perspective of the locals and made me think of the things they must have had to endure whilst elsewhere in the world, we were all but oblivious to the extremity of the situation.

I’m so sorry this happened here.

I’m so sorry this happened to you.