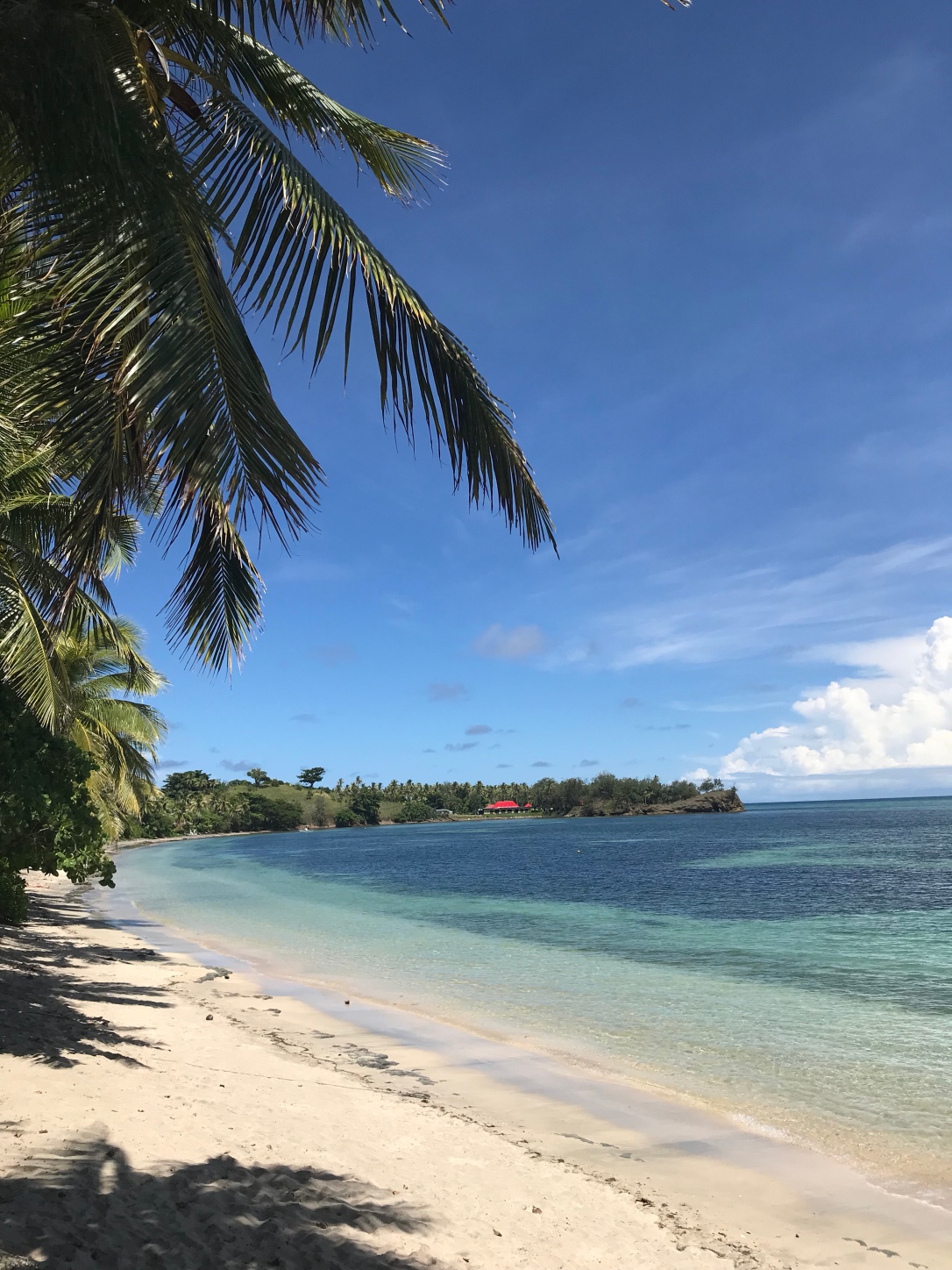 It’s actually unbelievable that a mere two weeks ago I was sitting on the plane, watching the crystal clear Fiji ocean disappear beneath me as I climbed higher and higher into the clouds en route towards my next destination. Since arriving in Australia, every day so far has been absolutely pandemonium so it’s been impossible to update my blog as I literally have not had a single moment to sit down and do it. Even the thought of trying to remember it all, never mind compile it into something worth reading has been giving me the fear this entire time, hence the silence…

It’s not that I find blogging a chore, I love it. It’s just sometimes when I’m writing about truly amazing moments, it’s difficult to put into words how a mere mortal like myself feels while all this life is happening around about me. I honestly believe there aren’t enough adjectives in the oxford dictionary to duly explain the colours of the tropical fish and reefs, how fluffy and white the sand was or how it just seemed to melt away underneath my feet… but I’m gonna have a bash at it anyway. Because that’s the whole point of this blog, it’s not just about the adventures, the funny stories or the mishaps that happen along the way. It’s about having somewhere to put it all so that even when I’m old, a little big grey, maybe with kids of my own (…maybe) I’ll be able to read it back and remember it all for myself and actually be able to SHOW them in pictures and words what I got up to around the world when I was 22. That is, if computers still exist and we’re not living in a virtual reality with robot dogs and cans of pizza. And if that actually happens… just remember you heard it here first. 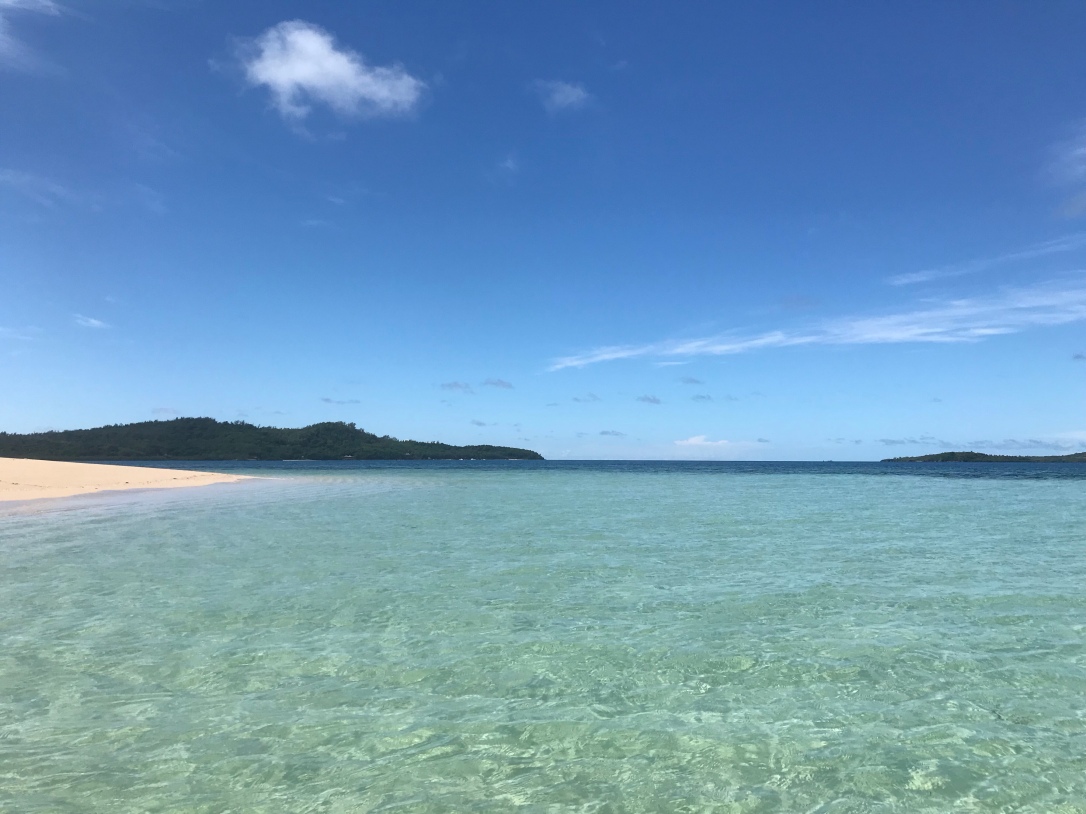 Carrying on from my last post, I decided to save an entire blog solely for my adventures and activities I got up to while I was on the islands because Fiji, for me, was where I really started to push myself RIGHT out of my comfort zone. It was the first time in my life I’d managed to get out of my own head and separate irrational fear from the ability to have fun. I don’t necessarily blame my mum (I don’t, so hold your horses before you fire a torrent of abuse at me on WhatsApp, Mawza) but she is pretty much scared of her own shadow and she worries about the smallest of things that are probably never ever gonna happen. So in a way, I think after 22 years of being surrounded by her endless list of FEARS (spiders, heights..) and ‘things to freak out about’, it’s possible that some of those actually began to rub off on me too. And while its good to be cautious, I was getting REAL sick of taking panic attacks walking up stairs and over bridges just because I could see through them. So I grabbed the bull by its horns, bit the bullet, took the plunge. I finally put my life into my own hands and decided I was done with saying no to things I’d LOVE to do, just never had it in me before to go through with…

Now as you can tell, this is something I’ve been thinking about loads over the past couple of years because it genuinely started to affect my everyday life. Like jumping over grated drains or coming to abrupt halts at the bottom of escalators and internally screaming the whole way up or down…although that fear was justified in a sense. Have you ever seen final destination? But the biggest influence behind my ‘JUST DO IT’ attitude stemmed from exactly this time 2 years ago when I was on the Thai islands snorkelling with fish and glowing plankton. Or at least, that’s what I had paid to do. In reality I floundered around like an oversized fish, too scared to stick my head underwater and see what was actually happening beneath my feet. I don’t have very many regrets in life, I’m a strong believer in everything happening for a reason but let me tell you, it’s something I’ve regretted PROFUSELY right from the moment I got off the boat that night. So this time, I knew I would never say no to doing something that possibly, one day I’d turn around and say ‘man, I REALLY wish I did that when I had the chance’. And that’s exactly what I’m doing. I’ve got all these opportunities just lining themselves up infront of me and I’m making sure I do every single one.

So that’s why when my boat pulled up to Mantaray Island and I noticed a chalkboard offering diving lessons towards getting your certification, I marched right inside and signed myself up. What better place to learn to open water scuba dive than in one of the most notoriously spectacular dive sites in the entire world. The course included 6 dives, including a ‘skills’ dive (where you lay on the bottom of the ocean floor and practice your buoyancy and breathing to manoeuvre yourself up and down in the water), some fun recreational dives, as well as a written theory exam at the end when you’re finally awarded your life-long diving license. I barely slept that night, from both nerves and excitement about the fact I was willingly about to dive 18m below the surface of the earth…and I was happy about it ?? Who is this megs and where did she come from? 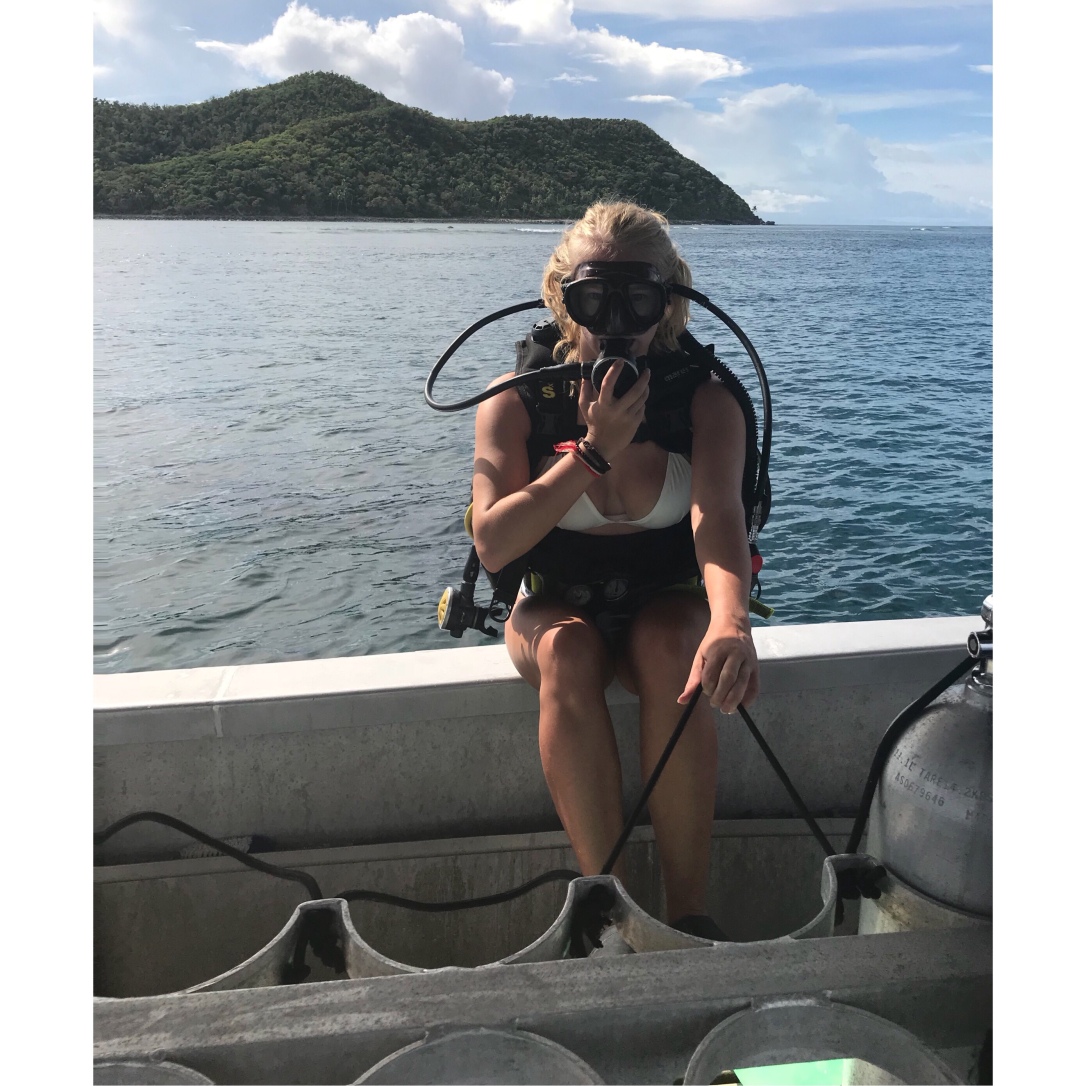 Hand on my heart, it was one of the most incredible things I have ever done in my entire life. It was hard work though, don’t get me wrong. As well as literally having to study for the exam, you physically have to get used to breathing through the regulator at a steady pace, remembering not to breathe through your nose, and the constant need to equalise your ears the whole way down was also pretty gruelling to begin with (be patient with it, if you push down too far too quickly you’ll run into some eardrum problems so take your time and equalise at your own pace!). But once you’re down there, and you become acclimatised to the pressure, there’s really no other feeling like it. It’s eerily silent. The only sounds around you are of the gas tank on your back working together with the regulator, and then of the bubbles blowing out of your mouthpiece straight up into the ocean above. You’re in another world now, a world not many get the opportunity to explore. A world full of so much colour and life and plants and animals that you never even knew existed. It’s hard to keep your sh*t together I’m not going to lie. I dropped my regulator right out my mouth from the sheer shock and excitement of seeing a shark swimming through the coral right infront of my eyes (luckily I did the skills dive before, or I’d have been permanently down there with the fishies…) 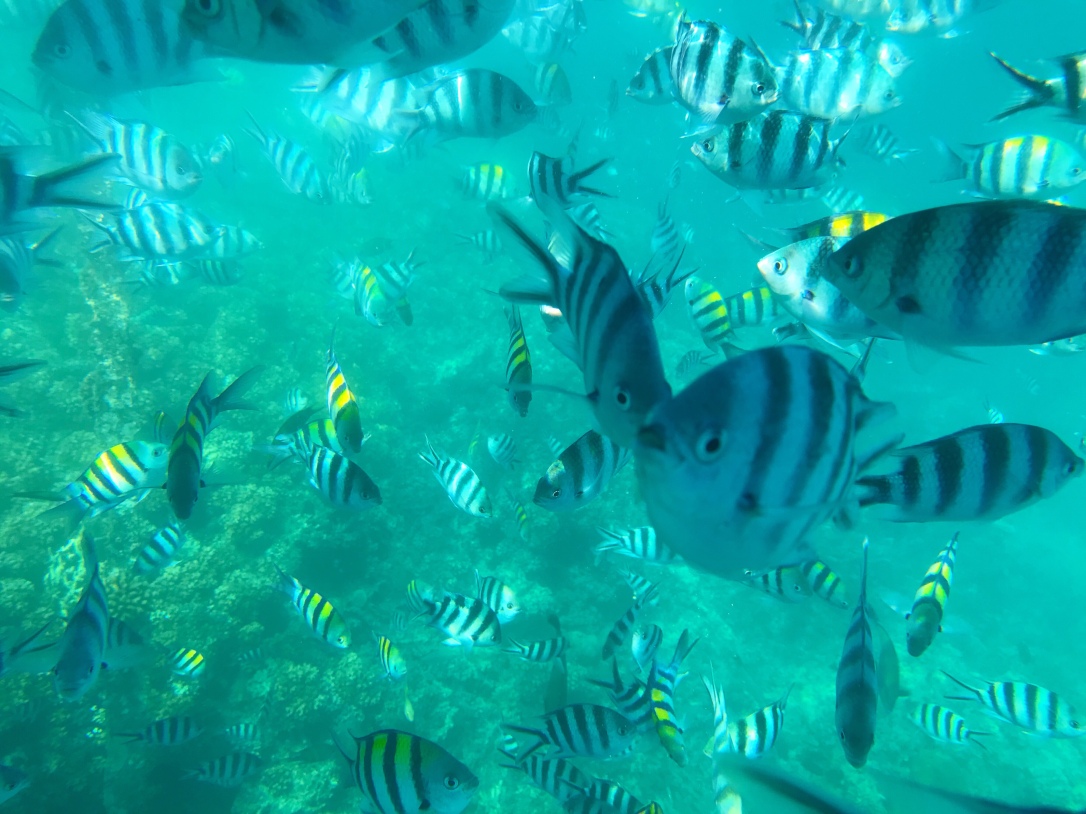 You begin to feel quite small. Suddenly the stresses of everyday life that we all seem to accumulate, and half the time bring onto ourselves, are irrelevant. You’re in total, blissful, serenity. Here you are, swimming with the fishies while the world above you continues to whirr and buzz and stress. You’re just floating through what feels like the beginning of time and space, before the human race left its footprint on everything the earth had to offer. Fiji is one of the only places where the dive sites remain relatively unspoiled, but I can’t imagine it’ll stay that way for too much longer. There are already conservation teams being drafted in to maintain and preserve the coral reefs and you can already begin to see some bleaching in areas where boat traffic is high. Also, the damage cause by locals using the coral to stand on and push off from whilst spear fishing is becoming increasingly apparent.

It’s why it’s so important to take these opportunities while we still can, to explore another side to this planet we all live on but never really get to know. There’s something to be said about being at the bottom of the ocean making friends with the jellyfish, but I also realise how idyllic it all sounds and how far removed it is from the typical human life of punching a time card and collecting a wage. And I know its all fine and well to say, ‘get out, explore and fist bump some turtles’, but the reality is it’s a pretty niche activity and not many people ever really get to try it. Which breaks my heart, really.

It doesn’t have to be diving, sky diving, or race car driving. It can be as simple as going for dinner once a week with friends you haven’t seen for a while, or taking a walk with your dog and for once, appreciating your surroundings rather than just going through the motions. It’s time to turn off autopilot and notice your life.

So I’ll end by asking one thing, for me and for yourself. Get in your car, book yourself a bus, a plane, a boat and get yourself out and explore while you can, while you’re fit and able and while the world still has all these hidden treasures waiting for you to discover.

Just do it, for you.